As the days fly by, a tiny village in Ponda, Goa is seeing a flurry of activity. Nageshi, around two hours away from Fort Tiracol Heritage Hotel, is the home of clay Ganesha idols in Goa. Families here have passed down this trade through the generations, their busiest time being just before the festival of Ganesh Chaturthi Goa.

Chaturthi, or Chovoth, is the most-awaited festival during the monsoons in Goa. While it is also celebrated in Mumbai in a big way, the manner in which it is observed here differs a fair bit.

While in Mumbai, the festival is more of a community event, in Goa it is primarily a family celebration. It is the most important religious feast of Hindus in the state, with schools shutting for a week to 10 days to allow families to get together, most often in their ancestral homes in the villages they come from. 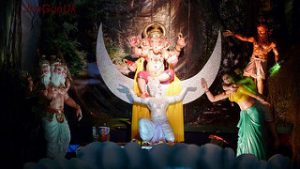 So what exactly is Ganesh Chaturthi? Chovoth commemorates the birthday of Ganesha, the beloved elephant-headed God instantly recognisable by his generous belly, curved trunk and the sweet in his palm. Known by many names – mostly Ganesha, Ganapati or Vinayaka, he is the son of Shiva and Parvati.

Legends also tell of his creation as a boy by Parvati, beheaded by her husband in a fit of rage and then brought back to life using an elephant’s head. There is much symbolism in these legends for the elephant represents great wisdom and immense strength. Ganesha is thus worshipped as a remover of obstacles and the god of intellect.

The date of his birthday is calculated according to the luni-solar calendar. Celebrations begin on the fourth day of the month of Bhadrapada, which in the Gregorian calendar corresponds to somewhere in August or September each year.

Idols are worshipped in homes for anywhere between two to 21 days. Smaller families keep it for fewer days, while communities observe rituals for up to three weeks. A priest offers prayers and invokes ‘life’ into the clay idol before it is placed under a matov, an elaborate pandal or pergola covered with lush intertwinings of betel nut, coconut, branches of mango leaves and bananas. Bazaars spring up across Goa with rich offerings to create elaborate matovs.

Women usually fast as a mark of sacrifice, offering gifts of betel nuts, coconut, mango leaves and varieties of seasonal fruit to the idol. On the third day of Bhadrapad, Ganesha’s parents, Shiva and Parvati, are worshipped, as instruments like the ghumot, cymbals and traditional drum are played. Freshly harvested paddy is brought home from the fields the following day, a reminder of Goa’s dominantly agrarian community. Hymns are sung, mantras are chanted and aartis are conducted before the idol every day, as a way of showing the god Ganesha a respectful time during his visit to each home.

Still, it is the the food that brings everyone together, young and old, religious and not-so-religious. It begins with the pachpalyachi bhaji, an array of five different vegetables made of leaves found in abundance during this period, most often offered during the pooja to Gouri, an avatar of Parvati. This is followed by kandamool, a delicacy prepared using fleshy vegetables including sweet potato, elephant yam and red pumpkin, soured by the addition of hog plums.

Most popular are the sweet dishes, particularly modak, known to be Ganesha’s favourite sweet, mangane, laddoos and neuvryo, with coconut and jaggery being the star ingredients. 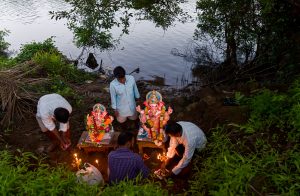 When the festivities draw to a close, it is time to say goodbye. To the beating of drums and chants of ‘Ganapati Bappa Morya’, the idol is taken to a water body – a lake, river or the sea – and immersed, from where it is believed Ganesha returns to his parents on Mount Kailasha.

As families spread far and wide on account of work, Ganesh Chaturthi becomes an important way to bring them back to their roots. Even other communities take the opportunity to get away together, spending quality time in quiet places like Fort Tiracol Heritage Hotel.