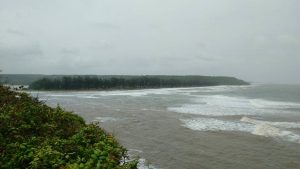 It was hot when we arrived at Fort Tiracol Heritage Hotel. Dry as a bone, save for the beads of sweat from the humidity on our foreheads. This was very unlike the feast of San Joao (St John the Baptist); the old folks say it always rains on July 24 and with not a wisp of a cloud in sight, we were starting to doubt it.
Fort Tiracol Heritage Hotel commands a striking panorama of sea, sky, and land, with each of its seven rooms offering a beautiful view of the swirling Arabian. The Monday room, in which we stayed, featured a gorgeous breakfast balcony, luxurious four-poster bed, and a well-appointed bathroom. 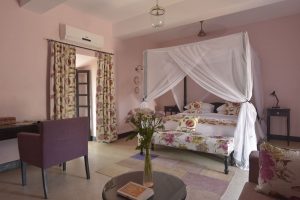 We headed to Tavern, the hotel’s restaurant built on the fort’s ramparts. A sumptuous meal followed with the most popular offerings from a menu curated by celebrated chef Christopher Saleem Agha Bee. At 4 pm, it was time for us to celebrate the feast.

The Feast of San Joao centers around St John the Baptist – the cousin of Jesus Christ. The Bible tells of the visit of a pregnant Mary, the mother of Jesus, to her cousin Elizabeth, herself due to give birth. It reveals that when Elizabeth heard Mary’s voice, the unborn child John leapt for joy in her womb. 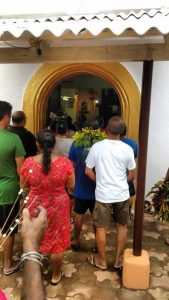 He would later grow to be a preacher urging people to repent for their sins and baptizing them in the river Jordan.
It is this leaping for joy and baptism by water that Goans take very seriously, the tradition being to jump into the various wells in the village. When we arrived at the chapel of Mount Carmel at the center of the village, the celebrations were well underway. It was a riot of colourful attire and noise. A group of men, two dressed as women, were singing to the accompaniment of traditional instruments like the ghumot, a clay pot covered – usually – with the skin of a monitor lizard and kansallem or cymbals.
Most revelers wore handmade wreaths of flowers and leaves on their heads, a beautiful reminder of John’s horrific beheading at the behest of King Herod’s stepdaughter. Fuelled by the sumptuous village lunch – a spread of local delicacies from Sorpotel and sannas to Xacuti and more – they sang and shouted before all fell silent to storm the heavens for health, prosperity and good will through prayer.
The procession of revelers – with many familiar faces of staff from Fort Tiracol Heritage 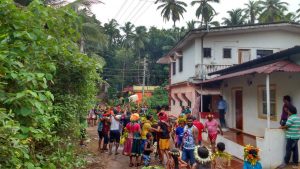 Hotel – then wound its way through the village streets, shouting ‘Viva San Joao’ and dowsing each other with water. One man recalled an old-time tradition of a game of catch between man and piglet, the speedy squealing target often getting the better of the wet, mud-splattered chasers, who wore body paint to portray themselves as tigers.
The cheering crowd came to a halt at the Tiracol village square, an open patch of cemented land at the edge of a rocky beach that is usually the venue for feasts, weddings, and other celebrations. A rudimentary muddle of pipes and shower heads served as make-shift rain, and the local DJ boomed favourite songs – Konkani and English alike – for the dancing crowd. 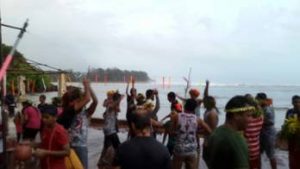 As if in answer to our doubting minds, the heavens tore apart, drenching everyone in sight. Not a soul scampered for shelter as drinks and cheers were passed around. We were chastised for missing lunch, and twirled in dance, plied with refreshments and dowsed with water. It felt familiar and novel, all at once.
Just before the sun dipped below the horizon, the entire troupe skipped across the rocky beach into the sea, heading a short way into the water before splashing all the newlyweds with water.
After the last song was played and several encores later, everyone made their way to the chapel where fresh helpings of sweet jackfruit, bananas and other seasonal fruit were passed around. As we headed back to Fort Tiracol Heritage Hotel, we heard the fading shouts of the village auction at which donations of homemade feni, fruit and other goodies go under the hammer for the chapel coffers.
The feast of San Joao is a huge attraction in villages like Siolim and Baga, but here in Tiracol, it is like celebrating with family. 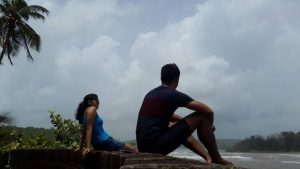 Relaxing at the end of the day